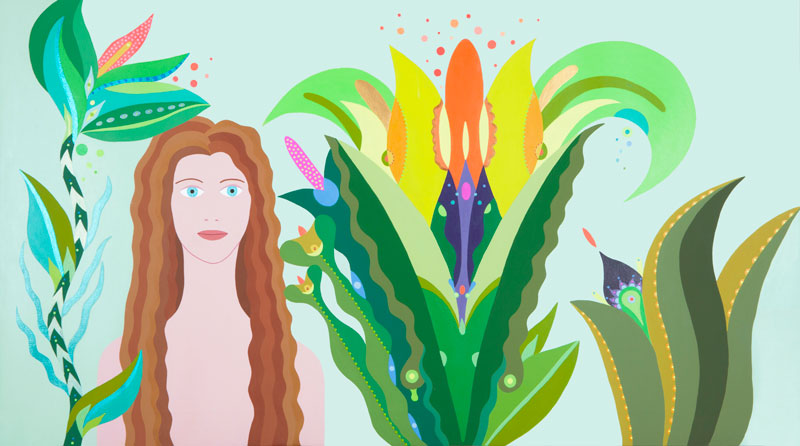 FULVIA MENDINI  was born in 1966 in Milan, where she actually lives and works.

Daughter of Alessandro Mendini the architect, after her studies in Illustration and Design at IED, she worked in the Atelier Mendini. After she dedicated herself to painting research. At first her style is very personal and decorative, with a particular interest in nature and picture. Her paintings is influenced both by the graphic design and illustration for kids and by the tradition of Arts and Crafts. Not using the medium of painting she devoted herself also to creation of jewels, glass and bags. She showed her works at Grand Palais de Paris, at ht International Expo of Taejon in Corea, at Triennale di Milano, at Biennal of Prague, and also in many different galleries. She is part of the Babylos Art Hotel collection of Verona and, with some mosaics in the underground station in Naples. She joint many collective shows, between them we can remember, in 2012 “202 mostre personali”, Fabbrica del Vapore, Milan, in 2013 “Kindergarten” Artforkids, galleria Antonia Jannone, Milan, nel 2014 “L’Arte al tempo della crisi” , Triennale di Milano, in 2015 “La famosa invasione degli artisti a Milano ” Antonio Colombo Arte Contemporanea , Milan. Some of her personal show in 2011 “Caleidoscopio” Little Circus, Antonio Colombo Arte Contemporanea, Milan, in 2014 ‘’Fulvia Mendini , dipinti contemporanei in scena aperta’’, curated by Michele Bellamy Postiglione, Galleria Frascione Arte, Florence, in 2016 “The Age of Innocence”, Antonio Colombo Arte Contemporanea, Milano, in 2017 ‘’Il Cavalluccio e Altre Meraviglie’’, Fabriano Boutique, Rome.