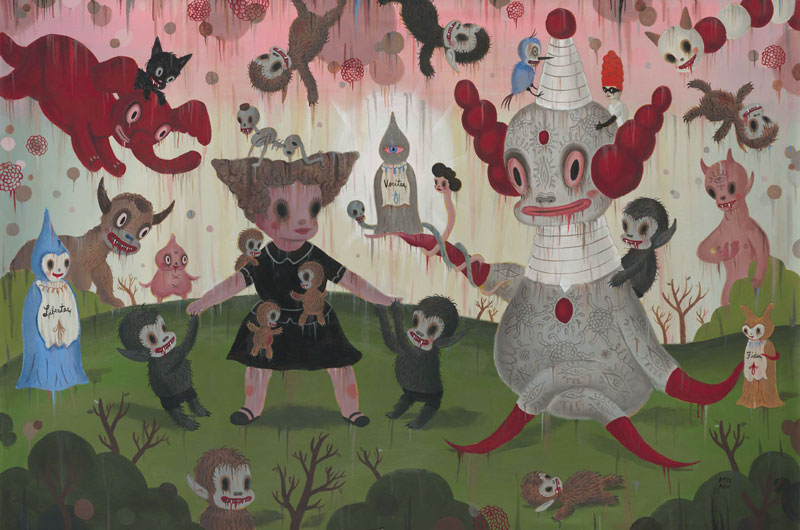 Antonio Colombo is proud to present Vicious, the new solo show by Gary Baseman, containing about thirty new works: 14 paintings on canvas, 4 paintings done on old book covers, and 8 drawings made on pages from old medical textbooks.
These works have been created specifically for this show, and they include new characters for the first time, new personalities in the rich fantasy imagery of the American artist.
The exhibition focuses on “hunger” as a basic instinct that reflects the animal that exists in every human being. But what are the new, curious toothy creatures invented by Baseman hungry for?
“Basically, they only want some love and affection – the artist says – but their hunger is so great that it is transformed into viciousness”.
The new paintings and drawings of the “Vicious” series can be divided into categories: landscapes, on the one hand, and portraits of girls with bizarre hairy creatures, on the other.
The landscapes show a sort of lyrical gathering of characters bent on playing, dancing and floating in a hypnotic dreamlike state.
Some of the new paintings represent episodes in which it is not clear if the furry creatures are innocently playing with the girls or ferociously fighting with them. The images Baseman paints, in fact, are hard to grasp, ambiguous. They describe enigmatic events, situations and circumstances, open to multiple interpretations.
A versatile artist, illustrator, designer and author of the famous Disney cartoon Teacher’s Pet, winner of three Emmy Awards, Gary Baseman is considered one of the outstanding figures of the Pop Surrealist scene in California, marked by the contamination between art and popular culture.
Baseman began his career in New York in the second half of the Eighties and the early Nineties, working as an illustrator with The New Yorker, The New York Times, Rolling Stone, Time, Atlantic Monthly and The Los Angeles Times.
After returning to California, Baseman focused on exploration of different hybrids between art, fashion, advertising, design, music and cinema, and coined the term “Pervasive Art” to define his aesthetic, capable of “blurring the boundaries between Fine Art and Commercial Art”.
With his painting, influenced by vintage cartoons of Warner Bros and Disney, but also by the critical and conceptual attitudes of underground comics, Baseman has created a fantasy universe inhabited by bizarre creatures, characters like Toby, Dumb Luck, ChouChou and Hotchachacha, alter egos of the artist that also embody unexpressed feelings, the inadmissible emotions and secret impulses every man feels with respect to the feminine world. Women, in fact, are the fulcrum around which Baseman’s visions rotate, often focusing on the conflict between good and evil, love and death, joy and suffering in human experience.
Included by Entertainment Weekly in the list of the 100 most creative people in the world of “entertainment”, Gary Baseman has shown paintings in museums and galleries all over the world, and gained a vast number of fans thanks to his vinyl toys, handbags, prints and other mass-market products. Besides the Teacher’s Pet series broadcast by ABC in 2000-03, which become a movie in 2004, together with a group of designers Gary Baseman has also created the visual identity of Cranium, a board game that is very popular in America.

Gary Baseman and the allegory of the human comedy

Vicious
You hit me with a flower
You do it every hour
Oh, baby you’re so vicious
(Lou Reed)

Gary Baseman doesn’t like labels, not even successful ones like Lowbrow Art or Pop Surrealism, which can be given credit for having familiarized a wider audience with the work of an array of Californian artists who have launched an international movement based on the convergence of art, illustration, comics, graphics and fashion design, skate culture, punk and graffiti.

Speaking of this extraordinary galaxy of artists, Baseman has termed them “Underground L.A. artists,” covering personalities like Mark Ryden, Camille Rose Garcia, the Clayton Brothers and Tim Biskup. In short, people who have broken down all the barriers between commercial art and fine art, making forays into all areas of creativity, with the aim of reaching a much larger audience than the one normally interested in contemporary art.
It is no coincidence that Baseman has repeatedly called himself a “pervasive artist,” capable of simultaneously working on multiple fronts, from painting to installation, performance to fashion, as well as the creation of cartoons and videos, board games and vinyl mascots, and even the organization of events like La Noche de la Fusión, a mythical holiday art festival that focuses on crossing of genres and the bittersweet side of existence.
A versatile artist, creator of the famous ABC Disney cartoon Teacher’s Pet, winner of three Emmy Awards, Gary Baseman is undoubtedly one of the outstanding figures of the new fantasy art, influenced by Pop imagery and mass popular culture.
His career began in the mid 1980s and early 1990s in New York, working with prestigious magazines like The New Yorker, The New York Times, Time and Rolling Stone, and garnering prizes and honors from the likes of American Illustration and the Art Directors’ Club. After returning to California, Baseman concentrated on painting, developing his own very personal aesthetic vision, in which the style of pre-war Disney and Warner Bros cartoons mingles with the critical, conceptual approach of underground art. The results take concrete form in the creation of a fantastic universe inhabited by bizarre creatures like Toby, Dumb Luck, ChouChou and HotChaChaCha, incarnations of different aspects of the artist’s character and, at the same time, archetypal personifications of sentiments, emotions and impulses found in all human beings. While Toby, Baseman’s most famous character, harbors secrets that cannot be confessed, as a sort of fetish of the artist’s guilty conscience, Dumb Luck, the smiling lame rabbit holding its own amputated leg, is the epitome of idiocy. ChouChou, on the other hand, is a creature that absorbs feminine negative energy and transforms it into a dense white cream that emerges from its navel, while HotChaChaCha is a little demon that makes angels impure, depriving them of their haloes. But the protagonists of Baseman’s paintings are above all female figures, heroines like Venison, Skeleton Girl, Butterfly Girl and Hickey Bat Girl, who with their male counterparts take part in the eternal battle between good and evil, joy and pain, love and death.
Gary Baseman’s work, in fact, is similar to the tableau vivant of a subversive Dada drama or a comedy of errors in which the characters interact, staging a mad, tragicomic pantomime of reality.
The artist talks about his work as a place in which genius and stupidity can meet, a mysterious, elusive space in which opposites coexist. Basically, La Noche de la Fusión, the art festival

organized by Baseman in Culver City, is a sort of collective ritual of acceptance of existential complexity, a glorification of the dark, Dionysian side of life. This also surfaces in his painting, which moves forward in cycles of works that explore different themes and subjects, enriching his fantastic imaginary with new personalities and situations.
Baseman is an introspective artist who translates fundamental themes like the beauty and ambiguity of existence into a simple, understandable pictorial language. “The theme of my art – he says – usually has to do with the bittersweetness of life. The good and bad mixed together. Love and Death. Ecstasy and Loss. The human condition. But I do it in a very playful way. Very sweet and dirty”1.
At times by alluding, at times explicitly, sex always has a central role in his paintings. The male-female polarity, in fact, is the motor of the story, the beating heart of Baseman’s comedy, always pivoting on the depiction of primordial instincts and impulses.
Vicious represents, in chronological terms, the latest episode of this ongoing narrative. Like other earlier series, it has its own mood, determined by the almost electrical tension between the characters and a sense of restless excitement that takes on the forms of an ambiguous, dangerous game.
Almost always, the images painted by Baseman are hard to grasp, describing enigmatic situations and circumstances, open to multiple interpretations. The same is true of the new works, on canvas, old book covers or anatomical plates, all marked by dark, twilight tones, a far cry from the colorful cheer of his early output. Here, for the first time, the artist approaches the theme of “hunger”, a primal impulse embodied by a congeries of hairy, clawed creatures whose appetite knows no bounds.
“Basically – the artist explains – they are just looking for love and affection, but their hunger is so great that it is transformed into ferocity”.
Vicious thus reflects the instinct that makes the animal become aggressive, but it is clear that the animal Baseman has in mind is man, portrayed in each case as one of his fetish characters.
Were it not for the dreamy look, as in an old cartoon, Gary Baseman’s painting might be seen as a Jungian evolution of Surrealism. With characters like Toby, Dumb Luck, Venison and the most recent invention, Ahwroo, the artist reformulates the theory of archetypes in a modern Pop key. Though starting with personal experiences and intuitions, he winds up outlining a sort of story, in episodes, of the collective unconscious, a choral fresco of the human comedy in which we can all recognize something of ourselves.
This capacity to transcend the individual dimension makes the oeuvre of this artist from California one of the most universal and genuinely “pervasive” of the new millennium.