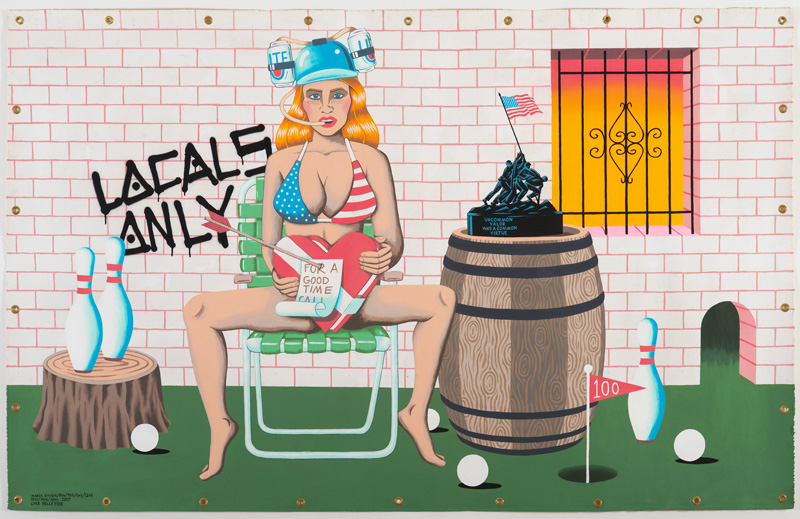 Antonio Colombo Arte Contemporanea is proud to present Filling Empty Rooms, the double solo exhibition of the American artists Luke Pelletier and T.L. Solien, curated by Michela D’Acquisto and Renato Montagner.
The young Luke Pelletier exhibits a body of works with a vibrant pop energy, heavily influenced by punk and skate cultures, in a celebration that, at the same time, is also a denunciation of the American consumer society.
Based in Los Angeles, but native of North Carolina, Pelletier combines characteristic elements of his home state, such as crocodiles and palm trees, with the decadent atmosphere of LA: the result are works halfway between deliberately kitsch brochures advertising some tropical tourist location and unlikely still lifes set in a tiki bar, consisting of pharmaceuticals, cocktail umbrellas and billiard balls.
After all, the painting that lends the show its title reads “lately, it’s been feeling like, I’ve been filling empty rooms with questionable career moves”, mantra of the millennial generation, and well sums up the spirit of the time, commented with sharp irony by the artist.
It is undoubtedly a fresh contrast to the maturity of T.L. Solien, one of the protagonists of the American art of the last thirty years, who in his paintings skillfully blends abstraction and figuration, thus creating a highly personal pictorial language with which to tackle the big issues of life, filtered through the autobiographical experience; to narrate his history, in fact, Solien uses vivid geometric brushstrokes reminiscent of collage and stencil techniques, which give life to characters similar to puppets, in a bittersweet metaphor for the human condition.
With his revisited expressionism, full of literary references and influences of the popular culture of the last century, the artist offers a disenchanted interpretation of the current state of affairs, especially in today’s America.
On show are about thirty works.