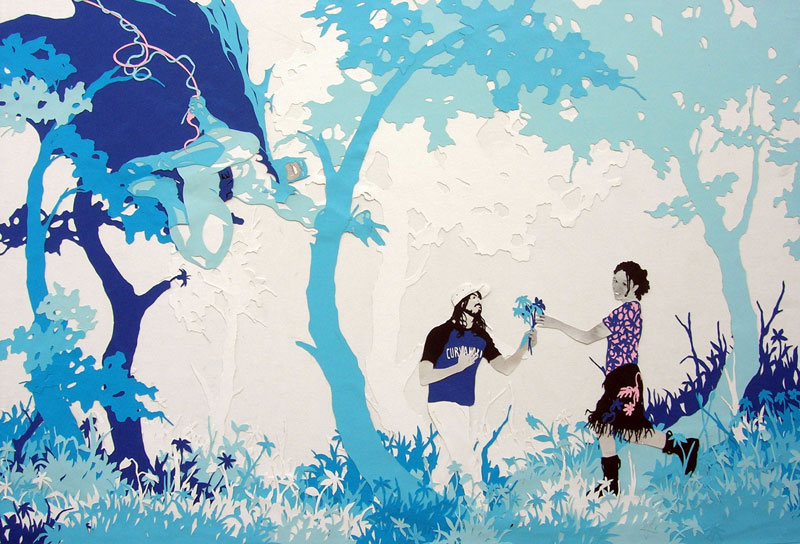 ANDREA MASTROVITO – In & Out of Life

Andrea Mastrovito, a young artist from Bergamo and one of the most promising on the Italian scene today, “doubles” this solo show in Milan in two spaces: Antonio Colombo Arte Contemporanea and 1000eventi.
Seen as a game of interaction between opposites – light and shadow, black/white and color, life and death – the title comes from the famous installation by Damien Hirst In & Out of Love, an extraordinary metaphor for the cycle of existence, exemplified in the life of an insect, from the egg to the larva, the butterfly to its decomposition. The exhibition itinerary of IN & OUT of Life starts at the gallery on via Solferino with the more physical, tangible part, based above all on the relationship between light and shadow. The upper level is in partial darkness, with an installation of cut paper. The light source placed in front of the work creates a play of shadows on the wall, in an explicit reference to Guernica. Precisely from the mouth of the horse, in the same position as in the masterpiece by Picasso, a video-projected butterfly is born, which ideally leaves the space, flies down the street and reaches 1000eventi, symbolically connecting the two galleries. On the floor, an expanse of black butterflies, like a carpet, prompts thoughts of death and fallen angels. Downstairs at the Colombo gallery, collage-paintings feature themes and colors that return in the arabesque curtains, also in cut paper. Situations and characters created by Mastrovito, the baroque taste for details, the lush vegetation in gothic style, as an ideal backdrop for his narrations, literally emerge from the two-dimensional to climb the walls, sliding over the floor, invading every available space. The atmosphere at 1000eventi is equally striking but more ethereal, based on pale tones, light and white. In the main room at via Porro Lambertenghi the butterflies return, symbols of lightness and delicacy, giving rise to forms and landscapes. The installation includes a video made in collaboration with Marco Marcassoli, where the tale of the butterfly that is born, lives and dies in a single day, as is its fate, has seven different endings corresponding to seven different ways of dying, including being eaten by a chameleon or captured in a child’s net. Also on the theme of fragile lightness, 30 very short, haiku-like videos, from a few seconds to a minute and a half in length, present little seminal intuitions, fragments of other possible works. The ideal finale of this voyage in the ephemeral and the fragile is an installation of black canvases, cut and lit from behind, conceived as a three-dimensional setting of the imagery of Andrea Mastrovito.