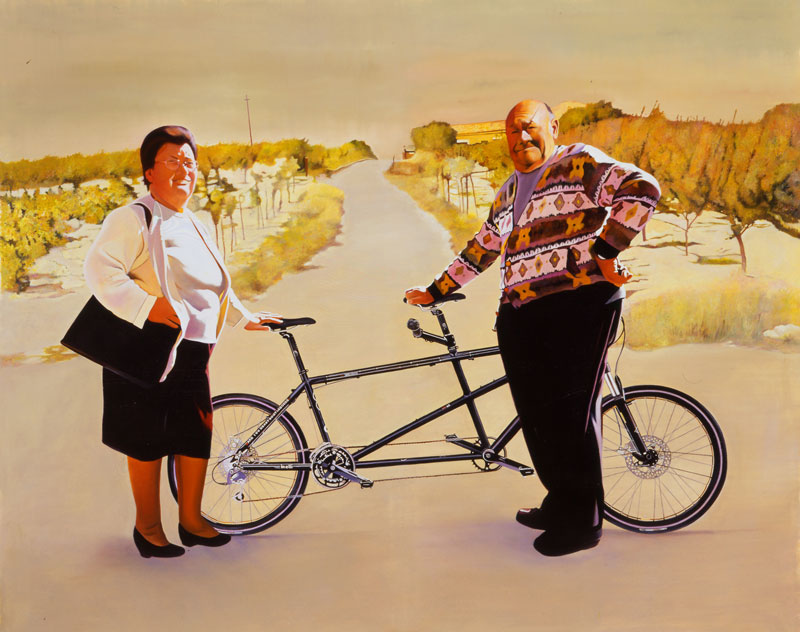 Galleria Antonio Colombo is pleased to present, for the first time at the gallery, a solo show by Francesco Lauretta, entitled Le metafisiche. The exhibition contains ten new works on canvas, in large and medium formats.
Lauretta begins with a poetic expression of his roots; he selects a frequent topos in the literary imagery on the so-called “south” of the world, wavering between charm and holography. His Sicily is the one of tales of processions, rites and miracles, that incredible hybrid of Catholicism and superstition, solemn ceremony and folk traditions, the ancient reality of feast days.
In the evocative, disorienting paintings included in this show the throng gathered to celebrate a religious holiday, or the children whose faces are gently illuminated in a procession, become metaphysical visions that nourish enigmas. The works are painted in an analytical manner, with a sensibility bordering on hyper-realism. This photorealist technique, metropolitan by definition, is intelligently transferred by the artist to a provincial, non-urbanized context filled with contrasts and temporal suspension, taking on the risk and charm of an ambiguous interpretation.
Thus painting becomes narrative; the work aspires to the universal, epic character of the painting of history. It is intellectual painting, conveying a different way of looking at the role of the artist. As Lauretta puts it: “many painters today reject personal, emotional gesture. Works are not supposed to have anything to do with belief: they are without religion and ideology, or more exactly they do not want to communicate moral and ethical values”. Instead, for Lauretta painting is all this, and if logic leads us to see painting as a “dead letter”, the possible chance, the artist seems to suggest, is that of the non-logic of being, of metaphysics. “In the end painting”, Lauretta says, “is not an adversary to be destroyed… but one to be feared”.
A catalogue with a critical text by Roberto Pinto will be available at the gallery.

The Metaphysics of Time