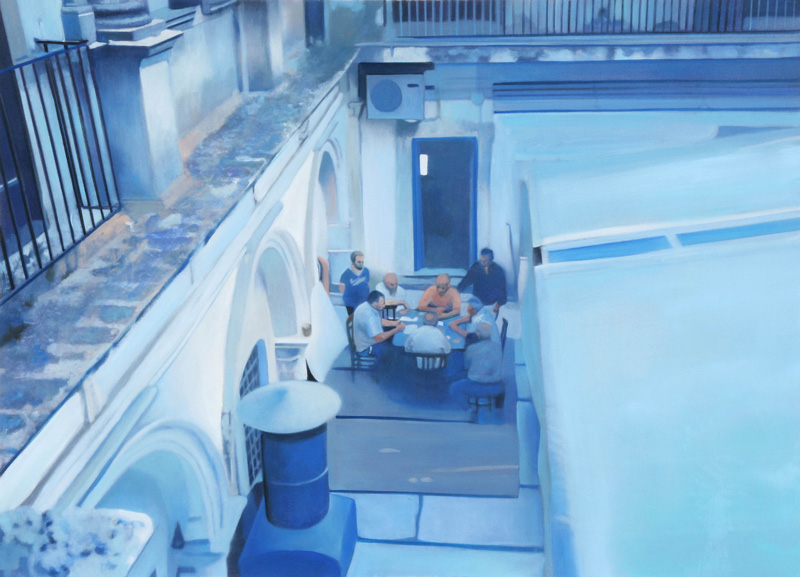 Antonio Colombo presents Privato, the second solo show by Francesco Lauretta at the gallery, curated by Francesca Pasini.
The entire gallery is “reconstructed” by a sequence of images, paintings and videos that tell the story of a house in Ispica, the Sicilian town where the artist was born. The mysterious house had attracted his attention for years. It stood on the edge of an old garden of a Liberty-style villa that was the home of a solitary woman. The garden has been broken up into lots, and among the other structures found there today there remains this house, in a constant state of change. Lauretta has created a sort of biography of the house, in an attempt to evoke the presence of that eccentric, solitary lady who gazes at us from a faded snapshot, about whom nothing more is known.
The gallery has been completely revised for the occasion, subdivided into rooms with walls painted in the dominant colors of the individual paints, to host various “portraits” of the house. From the outside an initial painting is already visible, an invitation to enter, entitled “Vieni”; then one crosses an entirely yellow empty vestibule, descends the staircase and directly enters the first room, where two paintings (entitled “Al mondo”) symbolize the initiatic discovery made by children when they play hopscotch (the game is called “mondo” in Italian). In the second room the house is seen in the video Ed ecco vigilarmi; in the third space, three paintings record different points of light: one has a yellow dominant (Nel paesaggio nervoso), another green (Da qualche parte), and finally blue (Stai calma). So the house, apparently always the same, reveals an inner secret that modifies it day by day.
The obsession of memory accents the visual metaphor of the private sphere, and the choice of extending the paintings through the coloring of the rooms that contain them indicates the perspective breakthrough found in each picture, but also the sense of extraneousness we feel when we enter the corridors of the private sphere. Everything is simultaneously closed and open, exactly like the rooms built in the gallery by Lauretta. The painting becomes the leading player in a theater piece in which the spectator directly enters the stage that is composed – precisely as when one enters a home – of objects, lights and shadows.