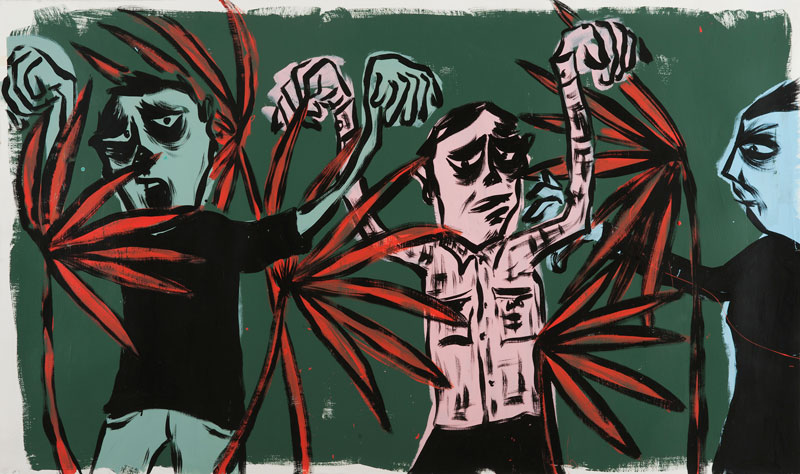 Antonio Colombo Arte Contemporanea is proud to present From Cali With Love, an exhibition dedicated to Jeremy Fish, Russ Pope and Zio Ziegler, three artists that embody, each in his own way, the visionary contemporary culture of the Golden State.

The title conjures the tourist catchphrases of the postcards that provide a cheerful and laid-back image of the state where Hollywood, Disneyland and Silicon Valley live side by side.
California is, in fact, the paradigm of a fantastic and virtual civilization, the place, as the American historian Kevin Starr wrote in Golden Dreams, where the relationship between reality and fiction, between truth and suggestion, is more ambiguous.

According to writer Wallace Stegner, California is like the rest of America, “only more so”, a concentrate of the American dream, the epitome of an unique and recognizable lifestyle.

Surf, skate, punk, but also urban art, psychedelia and underground comics are only a few of the cultural matrices of the California Dreaming that re-emerge from the works of Fish, Pope and Ziegler, where daily life is mixed with imagination, in the pursuit of an immediate and narrative art, able to overcome the disciplinary boundaries of contemporary art.

The three artists share, in fact, the same passion for an art without borders, that ranges in various fields, from street art to clothing, from illustration to skateboarding, passing through many collaborations with brands, such as Vans, RVCA and Santa Cruz.

Each of them possesses an unique style, recognizable marks and lines.
The style of young Zio Ziegler is urban and tribal, but also dedicated to the reclamation of the history of art.
The graphic language of Jeremy Fish, a recognized character of the Californian skateboarding world, is, instead, defined by sharp outlines and ultra-fantastic contents.
Finally, Russ Pope’s work is more strongly linked to drawing, but with fast and quick brushstrokes, in which the Expressionist taste merges with underground comics.

JEREMY FISH, 1974 Albany, NY. Lives and works in San Francisco.
Well known for his unique presence and aesthetic contributions in North Beach aka Little Italy, Jeremy Fish is a prolific illustrator, product designer and fine artist based in San Francisco for the last 21 years. His artwork is mainly about storytelling and communication, told through a library of characters and symbols with an emphasis on finding a balance of imagery somewhere between all things cute and creepy. Recognized for his original style and clever characters, Jeremy Fish continues to exhibit new works in contemporary galleries and museums world wide. Fish is currently the first ever Artist in Residence at San Francisco City hall, working on a project celebrating City Hall’s 100th birthday.

RUSS POPE, 1970 Usa. Lives and works in Massachusetts.
Russ Pope’s art draws from the social and political environment surrounding him in his daily life.
Pope’s inspirations have been skateboarding, music and the creative, interesting people he encounters daily.
His bold strokes, finite doodles and striking paintings are characterized by faces, still lifes and humorous events.
From the early days in Central California skateboarding, drawing and attending punk shows, to his current life in New
England, Russ has processed life and his interactions with his world through the prism of a pen and a paintbrush.

ZIO ZIEGLER, (born February 18, 1988) is an American artist, known for his intricately patterned paintings and his large-scale murals that can be seen in major cities in the U.S., Europe and Asia. His work reflects the diverse influences of late medieval and quattrocento painting, aboriginal, African and naive art, and the European graffiti movement. Driven by intuition and depicted with a playful use of space and materials, his subject matter reflects the human condition, with reference to allegorical, mythical and artistic lineage. He paints in the belief that his paintings complete themselves by triggering self-discovery in their viewers.
Zio Ziegler studied at The Rhode Island School of Design and Brown University. Since graduating with a BFA from RISD in 2010, Ziegler has developed an international studio and mural practice to support his philosophy that art should be available to all.
He currently lives and works in San Francisco.