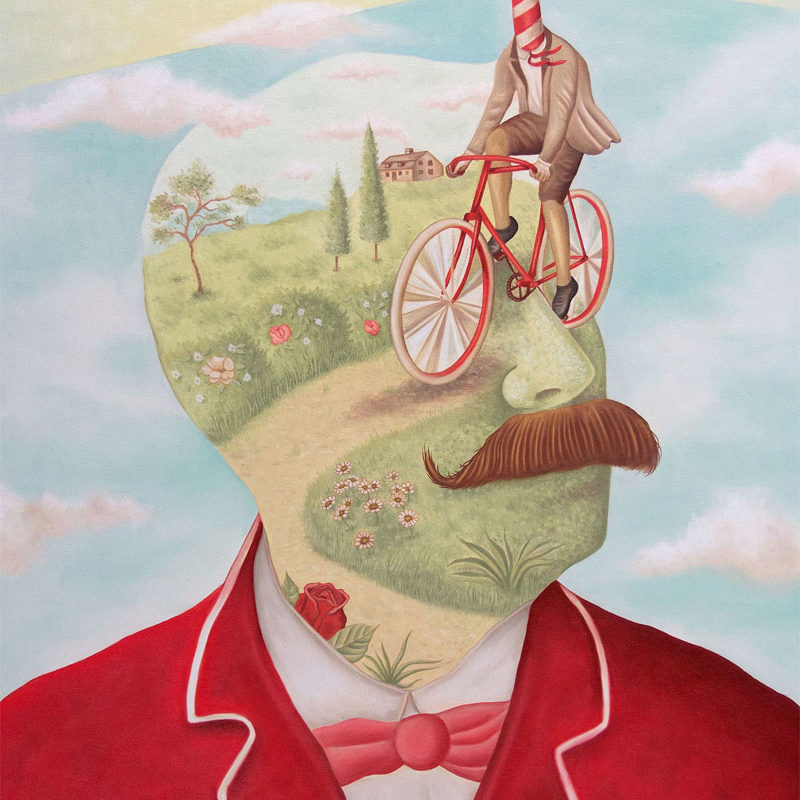 from November 26th till January 13th

Rafael Silveira says about this project:
“Imagine a man that over the years acquire the skill of explore his own mind, like a traveller by walk in a psychic jungle. Systematically, year by year, he walks by his mental landscapes, discovering and recording in sketches this new world like a 16th century traveller painter in a artistic-scientific mission.

It has been said that a person is big as our dreams. Our friend have big dreams, but only his two feet to explore an entire continent. That was when, in a unusual day, everything has changed. In one of his explorations he found something, what could enable him to go beyond his visual field: a Bicycle.
Un Giro della Mente bring to “Wakefulness” (how I named what our society call our “real world”) a collection of portraits of the most interesting finds in his first journey at two wheels”.
Silveira’s imaginative work combines figurative classical painting, comic-inspired imagery and surreal subject matter, resulting in a universe where dreams are blended with waking life and the impossible appears commonplace.
His paintings are like portals into an alternate dimension. A vintage aesthetic and various themes including lingerie, tattoos, skulls, music and food converge in a visual expression of Silveira’s stream of consciousness.
The exhibition will include a collection of six new oil on canvas paintings, plus a “bonus track” selection of prints and original drawings.

Rafael Silveira was born in the harbor city of Paranaguá, in the south of Brazil(1978).
Since 1988 he lives and works in Curitiba. The artist started doing alternative comics in the 90’s, publishing in independent magazines and major publishers like Dark Horse. He also work as designer/art director. After this “bootcamp training time” in the graphic arts, he quit a ten years award winning career to became a full time artist. Since that, his fine art works have been exhibited in prominent galleries in Brazil, USA and Europe and are included in great private and public collections such as the Museum of Modern Art in Rio De Janeiro. The artist have two monograph books published in Brazil, and was featured in the cover of Zupi Magazine.