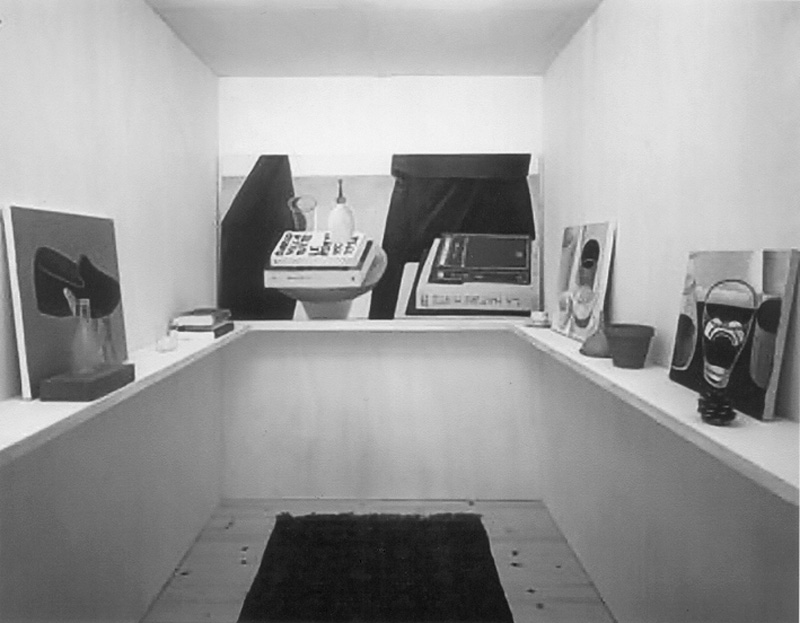 The game of dominoes, besides its presence in more than one of Nathalie Du Pasquier’s paintings, is a metaphor for a system of associations that can be created inside a known code. Whether we are using numbers or objects, the many possible combinations can lead to success or to a blind alley. This also happens in the domestic landscape of Du Pasquier, intentionally reduced to a small range of series of everyday objects that are often repeated. An approach that is particularly evident in this latest cycle of works, where the repeated objects create a system of relationships not only in individual paintings, but also from one painting to the next, making ideal contacts, almost three-dimensional harmonious connections that involve the entire space of the gallery. And it is no coincidence that Du Pasquier has also built a real room in which real objects, objects that have been painted and small canvases oblige the viewer to “make his own moves”, to discover the relationships on his own, to enter into the spirit of the artist.

Nathalie Du Pasquier (Bordeaux, 1957) has lived and worked in Milan since 1979. She has shown her works in many exhibitions in Italy and abroad, including the annual shows with Le Cadre Gallery in Hong Kong, shows at Galleria Jannone in Milan in 1987 and 1994, in 1993 in Edinburgh at the Fruit Market Gallery, in Mantua at Galleria Corraini (1996), in 1997 in Belfast at Fenderesky Gallery. In 1998, after the solo show in Milan at Antonio Colombo Arte Contemporanea, she showed in Munich at the Christa Burger Galerie. In 2000 another exhibition at Antonio Colombo Arte Contemporanea in Milan was followed by shows at Fenderesky Gallery in Belfast and Rubicon Gallery in Dublin. Group shows include two in Milan: “Sui Generis” at PAC, curated by Alessandro Riva, and “D N Arte” at Palazzo Durini, curated by Antonio D’Avossa, and one at the Consortium of Amsterdam, curated by Chiara Guidi. In 2001 her works were seen in the solo shows “Still life” at Studio Arte 3 in Trieste, Le Cadre Gallery in Hong Kong, and the Rubicon Gallery in Dublin, and in the group show at Antonio Colombo, “Senza mani! Provos e biciclette bianche”.