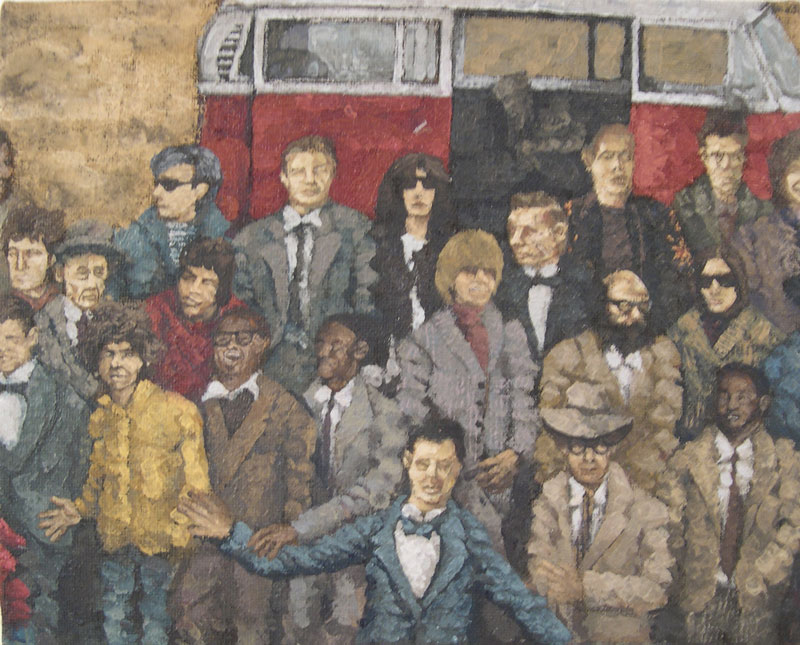 How many paintings have been transported in a Volkswagen bus? How many rock groups have loaded their equipment into one? How many nights did they spend on the seats while on tour? How many children have been conceived in the back of a VW camper? Artists, poets, singers and thousands of anonymous individuals have shared the passion for living in freedom on the wheels of the Bulli, the pseudonym of the Volkswagen bus.
Near a VW van there was always a smiling face and a beautiful, carefree girl. Not some coy advertising scenario, but empirical evidence.
The Samba Bus, together with the Beetle, were the happy wheels of our youth: comfortable, reliable, indestructible and happy – like true art.
A simple, popular means of transport that drove the dreams of an era, only to become a collector’s item, almost a cult object: an symbol of liberty, of an era of rebirth and hope.
The exhibition No Brakes! stems from the realization that the Bus is not a refugee of the good old days, but still functions as a catalyst of desires and passions, becoming, in this case, the muse for a group of artists all born when the Bus was no longer in production.
Maria Francesca Tassi, a very young artist from Bergamo, was even conceived in a Westfalia camper, proud symbol of her parents’ freedom.
The exhibition will be held at the gallery of Antonio Colombo, the site in September 2001 of the show No Hands! on the white bicycles of Provos, the Dutch protest movement, precursor with its happenings in 1967 of the student revolution of the following year.
Galleria Antonio Colombo represents and shows Italian and international artists, while always keeping an eye on phenomena impacting a wider cultural sphere where art mingles with design, music and the demands for creative freedom of youth culture. It is located on a prestigious street in Milan, the same street as the newspaper Corriere della Sera, and has a large storefront window which will display the Samba Bus, placed in the entrance area throughout the exhibition and containing a sound installation. Downstairs a group of young artists, nearly all of them in their first show, will have fun steering through the curves of creativity with no brakes.

Entering history can be a trip, a long trip, like the one made by the Volkswagen Typ 2, the van designed to reach the ends of the earth, and a cult object today.
The brilliant idea of making a “people’s van” came to the Dutch importer of Volkswagens, Ben Pon. In 1947 he suggested to the director of the factory in Wolfsburg, Ivan Hirst, to use the bed of the well-known Beetle to make a version for transporting things. The Dutch dealer made a sketch in his datebook, showing a “box” perched over the wheels of the Beetle, with the motor to the rear and lots of space for loading goods. The idea met with the favor of the president of Volkswagen at the time, Heinrich Nordhoff, who told his engineers to develop a design. On 12 November 1949 the first Typ 2 made its official debut, based on the earlier Typ 1, namely the Beetle, the car desired by Hitler for the German people, which was to become a legend on four wheels after World War II.
The long trip of the Typ 2 starts on the assembly line that began in February 1950, with a closed van model. The commercial success was immediate, also to meet the transport needs of Germany during reconstruction.
In March that same year the Wolfsburg plant issued the Kombi models, with side windows, a “combination” for transport of people and goods.
Soon the ingenious, versatile vehicle had a nickname, “Bulli”, from “bull” in English, to indicate its sturdiness and reliability.
The evolution of this work vehicle continued, and in 1951 the Samba Bus appeared, a true van with larger windows and comfortable seats, for up to seven persons. 1952 was the year of the pickup, which was an immediate hit with masons, carpenters, glaziers, small transport firms. Young people also discovered this economical, reliable and incredibly spacious means of locomotion. With the Samba Bus you could go to school and take day trips as well as work. But you could also go on vacation, packing the Bulli to the gills and covering thousands of kilometers without worries, stopping to sleep anywhere along the way. Soon the normal seats were being replaced by real fold-out beds. This was the invention of the camper, put into production by Westfalia in 1961.
This unimaginable success story led to a new model in 1967, after 1,700,000 units of the Typ2 had been sold.
The world was changing and so did the Bulli. In August 1968 production began of a second series, which was to continue until the end of the 1970s.
In the meantime, the Volkswagen bus rolled its wheels across all the continents, transporting millions of people literally to the ends of the earth. Now that the bus, after more than fifty years, seemed ready for retirement, a prize for collectors of antique automobiles, twenty very young artists have helped the Typ 2 to continue its trip through history, shifting it from the history of transport to the history of art.