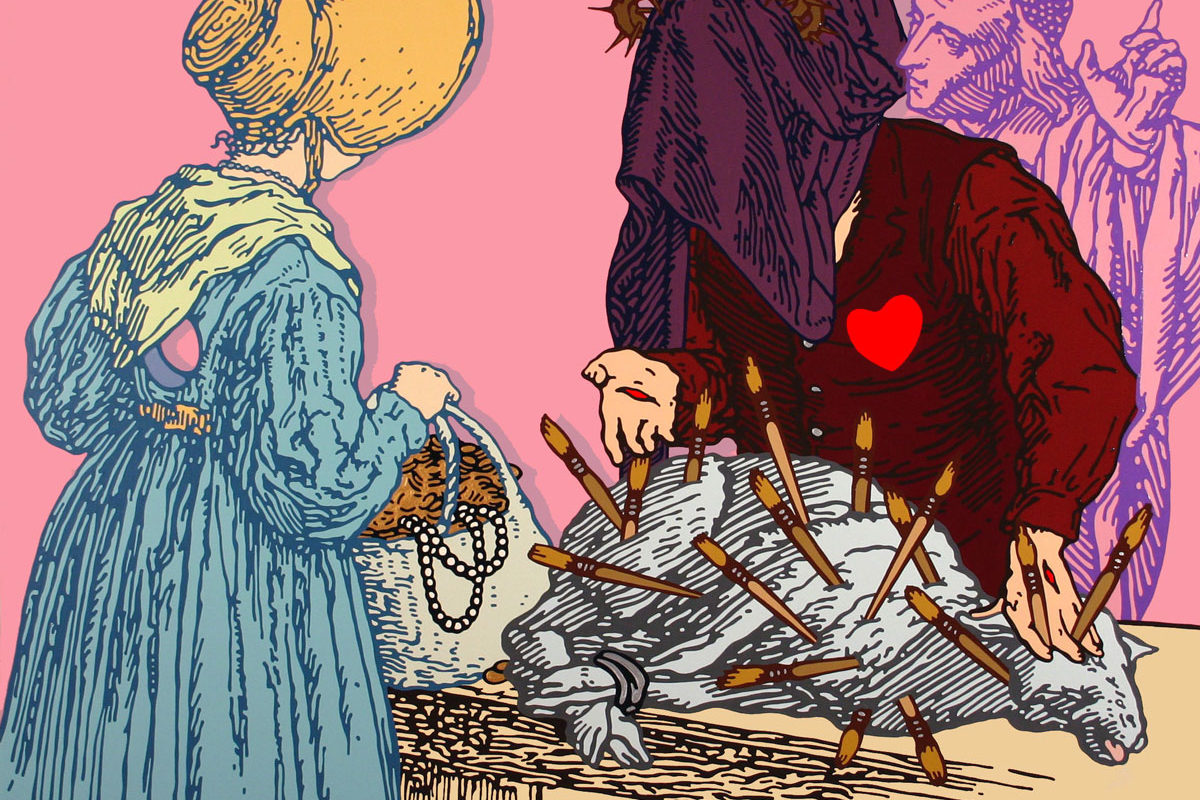 Antonio Colombo is pleased to present the second solo show in Milan by Gabriele Arruzzo.
“As himself” is a definition borrowed from the world of cinema, indicating that a person plays the same role in a film that he plays in real life. Reversing this concept, it is possible to imagine playing a role in life like an actor who plays a part, just as a urinal can become a fountain in the mind of an artist.
Arruzzo avoids discussing his work in a direct way. As he puts it: “My works could also not be called anything, they could have no name and no title, although the title often offers a glimpse of a general sense that links all the elements together. But at the same time I am not interested in creating a rebus: that would be limiting. (..) Just as using illustrations to create other illustrations would be limiting… I want to make paintings, which is something else again!”. So from these indications, and from the title of this new cycle of works, we can deduce that the guiding motif of the exhibition is investigation of themes like the dualism between reality and fiction, between life (author) and art (work), shedding light on the subtle relationship that connects painter, painting and viewer as ideal participants in the same experience.
And there’s more. For Arruzzo it is important to bring out the connections that exist between love and death, the only experiences we cannot control as human beings. At the same time he wants to underline his own awareness of artistic practice. An awareness that also comes from living in the provinces of Art and from carefully observing, in that position, what happens inside the Empire, without useless, anachronistic languor or romantic escapism into the past, with the knowledge of being oneself, of being a painter. Though some people may see this position as stupid.
If the imagination is the territory where everything is possible, for the artist painting is the means to nourish all this, drawing on mythological, historical and literary suggestions, filtering all elements through the light of History.
Questioning his “craft” he creates, for this exhibition, impossible encounters between Leo III and Charlemagne, advocates of limitation of the worship of images, depicting them in a visitation precisely inside the studio of a painter. Through this game of dualism, where opposites coincide, the artist meditates on the relationship between the painter, who makes a work through creation, and his specular twin, the serial killer, who stages an artwork, instead, through an act of destruction.
Thus Hitler, rejected in 1907 by the Fine Arts Academy of Vienna, becomes the pretext for a new Melencolia I of Albrecht Durer, making a sentiment shared by artists of all ages universal: the saturnine mood that comes before the spark of artistic creation. In like manner, the renowned English painter Walter Sickert, who according to recent studies might have been Jack the Ripper, becomes the excuse for an approach to a favorite subject of both Van Gogh and Francis Bacon, namely the “painter on his way to work”.
Among the works in the show, the funeral of Gregor Samsa, protagonist of Kafka’s “Metamorphosis”, has a completely different nature. Here Arruzzo pays tribute to the alter ego of the writer, honoring the final sacrifice, the heroic renunciation of a life as a universal stranger, extraneous to the human race, of he who, like many others, has not been able to “play” his life as he would have wished, namely “as himself”.