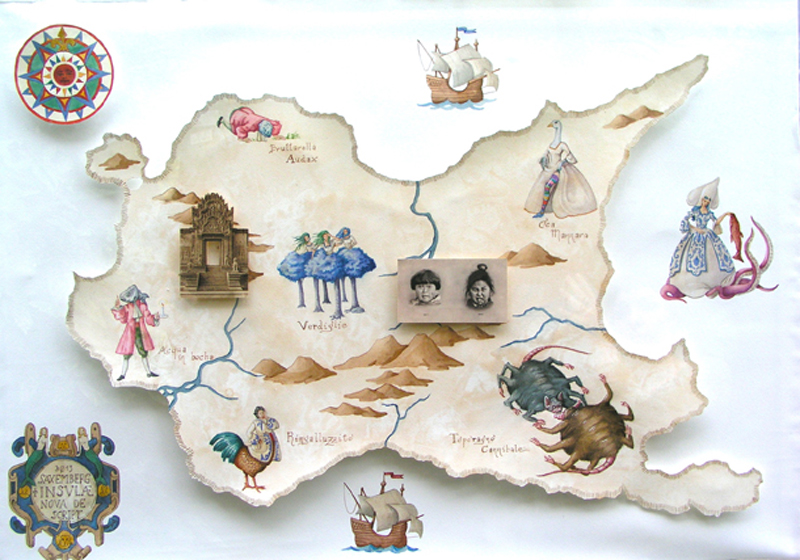 VANNI CUOGHI – Back to Saxemberg Island

Antonio Colombo presents for Little Circus, the space of the gallery dedicated to special projects, Back To Saxemberg Island, Vanni Cuoghi’s new personal exhibition, a show that wants to be the documentation of the suggestive journey that the artist envisages to go on to reach Saxemberg Island.
It is said that the island was discovered by the Dutch explorer Lindeman in 1670, and that it was located in the southern part of the Atlantic Ocean, about six hundred miles north-west of Tristan Da Cunha.
It was indicated again by two American sailing ships in the nineteenth century and at a later stage by the captain of a British ship who managed to describe its topographical characteristics.
Saxemberg was never seen again, it disappeared forever.
At the heart of Little Circus, the artist “reconstructs” the map of the island where the sample taking of vegetables has been carried out and where singular animals have been spotted.
Six plexiglass cases hold tiny plants with supernatural powers, such as the Auricolaria Mentale, that permits people to communicate telepathically up to a mile of distance, as long as one keeps a corolla and a leaf in the pocket, or such as the Bruttarella Audax, that, if worn around the neck, keeps away anyone who is ugly-looking.
The works are realized with cut-outs made out of medicine boxes, to symbolize a beauty dreamed of and inhibited by the brands of the healthcare companies, by a scientific knowledge that marks its ambivalence.
On the walls, a fictional bestiary, composed of six little “cages” with open doors, containing animals and anthropomorphic characters, such as the Farfallatrice, female specimen of the human species who feeds on human blood, or such as the Oca Mannara, werewolf of a gentle disposition who is endowed with magic powers and is able to foresee the future.
Vanni Cuoghi penetrates worlds, imaginary or really existed, circumnavigates the furthermost strips of land of the imagination, retraces legendary tales and makes them his own, and, as an able player, leads the observer on a ambiguous and insidious dimension.

Vanni Cuoghi was born in 1966 in Genova.
He graduated in Scenography at the Academy Of Fine Arts Of Brera in 1989.
His painting depicts characters that almost seem out of a book of fairy tales without happy endings.
He realized big cycle of paintings for hotels, churches, public and private buildings until 2012, when Costa Crociere commissioned him eight big paintings for the Costa Fascinosa ship.
He took part to many shows and fairs, both in Italy and abroad, among these: “Arte Italiana 1968-2007 Pittura” at Palazzo Reale, “54th Biennial Of Venezia” at Corderie dell’Arsenale, “Biennial Of Saint Petersburg”, “Biennial Of Prague” and “Biennial Of Italy-China” at Villa Reale in Monza.
His work was on show at Frieze Art Fair in London, Scope Art Fair in New York, in Pechino in 2008 during the Olympic Games, in Shangai at Liu Haisu Museum and in Permm, in Russia, at the contemporary art museum.