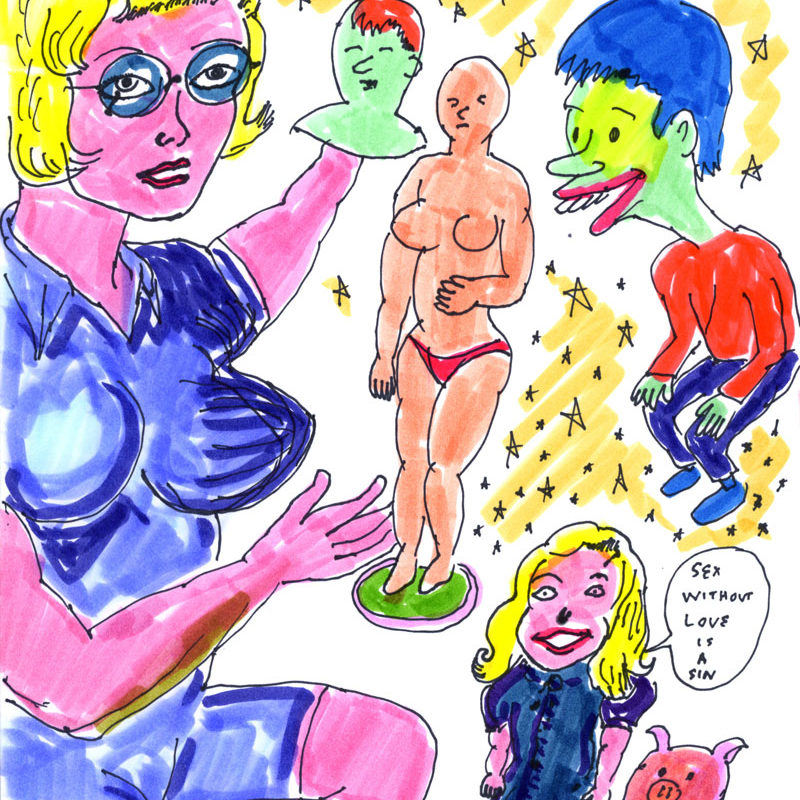 Daniel Johnston – The Devil and the Daniel

On 22 May 2008 Antonio Colombo Arte Contemporanea of Milan opens the first solo show in Italy by Daniel Johnston, curated by Luca Beatrice.
A celebrity of the underground scene, an outsider in the last school of American singer-songwriters, Daniel Johnston makes music that has universal impact. With his nasal, tense voice he narrates the most dramatic facts of life, but without ever waxing pathetic. In the post-punk fervor he reinvents the term Lo-Fi: his lyrics alternate nonsense and intimate, desperate confessions, very long verses and surprising rhymes. His sounds are without artifice, leaving no distinction between the man and the artist.
Daniel Johnston was born in 1961 in Sacramento (California), in a Catholic-Methodist family. At the age of eight he began to draw comics based on King Kong, Godzilla, the Bible and his cat. As a teenager he became interested in music: Bob Dylan, Neil Young, the Sex Pistols and, above all, the Beatles. At the age of 20, in the garage with an old reel-to-reel tape deck, he recorded his first song, Song Of Pain, about his unrequited love for Laurie, a friend and classmate. When his bipolar disorder began to make itself more evident, he dropped out of college and moved to Houston to stay with his brother Dick. He worked in an amusement park and continued recording songs on his own. Due to constant tensions with his sister-in-law in moved to San Marcos (Texas), to the home of his sister Margy, where he recorded his first distributed album, Hi, how are you? in the midst of an emotional crisis. In spite of his family’s worries about his health, Daniel left the city with the workers from the amusement park. For nine months he sold popcorn, on the road, in America. He decided to stay in Austin, a sort of Mecca of underground illustration. On Guadalupe Street he handed out his cassette tapes for free, like calling cards, and soon became a local legend, gaining mention on the traveling show of MTV, Cutting Edge. His first live performance was at the Beach, opening for the band Glass Eye. Official distribution of his records began in 1986. That same year, the Austin Chronicle named him “Songwriter and Best Folk Artist of the Year”. With twenty years of career behind him, today Johnston is a classic. His fans include Sonic Youth, REM, Pearl Jam, Beck, David Bowie and Steven Spielberg. Kurt Cobain loved his music and often wore a t-shirt with one of his drawings on it.
Though better known for his music, Daniel Johnston is also much admired as a visual artist. He became famous in this guise when he was invited to participate at the Whitney Biennial in 2006. His illustrations have roots in a puerile imagination: the innocence of childhood is mixed with the worst fears connected with adulthood. Daniel develops his own parallel universe, generated by obsession more than by intellect, reorganizing the world from his point of view. He was initially inspired by the characters of comic strips and cartoons, like the Incredible Hulk, Captain America, but also Frankenstein and Casper the Friendly Ghost.
Over time the creatures have transformed into their opposites, in increasingly intricate plots. The very colorful illustrations depict a life cycle with mythological overtones: birth, growth, illness, death, redemption. New characters appear, like Jeremiah The Frog, a positive symbol of hope, The Duck, an explicit phallic symbol, Sassy Fras The Cat, his very first creation that evolves into a girl, then a man, then a superhero who fights the forces of evil; a little man in dotted briefs, the Polka Dot Underwear Guy, his alter ego since high school days. This last subject, often represented without a face or without a head, is often transformed into another character, Joe the Boxer, with the top of his head opened up, as if the lid had been removed. Certain symbols are almost like trademarks, including the toy blocks, a reminder of childhood and innocence, or the stars, symbols of the night and the search for God.
The dreams, but above all the nightmares of Daniel Johnston return in his first Italian solo show at Antonio Colombo Arte Contemporanea, in a series of colored or black+white drawings that narrate the eternal struggle between good and evil through the quirky imagery of the artist. A documentary film will also be shown by the independent filmmaker Jeff Feuerzeig, The Devil and Daniel Johnston (USA, 2005, Tartan DVD). The film, based on the memories of his parents, siblings, ex-manager Jeff Tartakov, journalists, friends and musicians, retraces the tormented existence, the illness and the artistic career of a veritable cult hero. A winner in 2005 at the Sundance Festival, the production draws on a vast quantity of video and audio material (amateur tapes, audio letters, comics, drawings) as well as many interviews. In this raw, sincere portrait we see all the most important moments of the life of Daniel Johnston, from his love for Laurie to his bipolar crises, his religious torments to his drive for success: the virtues and foibles of an authentic talent. Materials illustrating the artist’s career – including the book The Life, Art & Music of Daniel Johnston (first edition 2000) and his latest CDs – will be available at the gallery.
A bilingual (Italian/English) catalogue will be published for the occasion, with texts by Luca Beatrice and Alberto Campo, music critic, editor-in-chief of Rumore and director of the Traffic Free Festival of Turin.