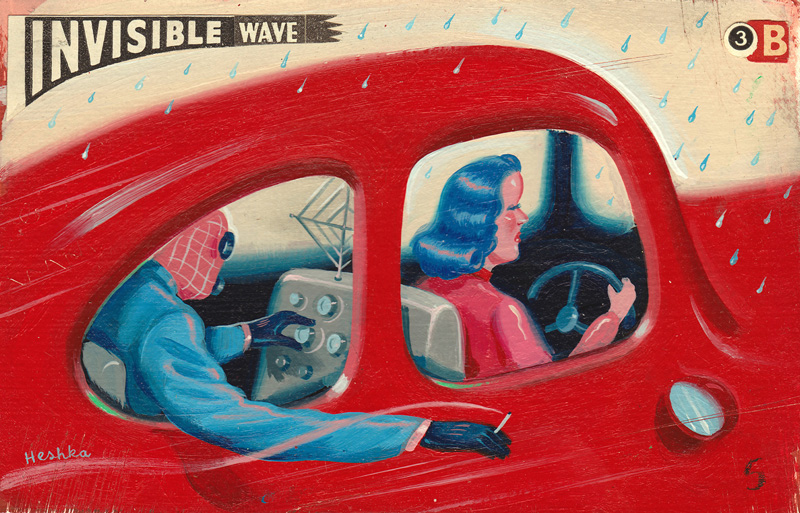 Heshka, canadian pop surrealist master opens for Little Circus –  a little space in the gallery dedicated to the special projects – his first Italian solo show with a series of works conveived for this occasion.

The work in this show aims to capture the feeling and sense of snapshots of blurry childhood wonder… of a childhood that exists only collectively, not individually.  The title “Ours” refers to OUR collective memory and subconscious.  These paintings were conceived as “false memories”… attempting to recapture that feeling as a child when you see something fascinating, and though you don’t grasp its meaning or function at the time, it makes an indelible impression on you,  leaving behind a distorted, fading memory.  A scene from a “grown up” movie, an accident, a naked lady playing card, a strange insect.  The paintings were created with the language of childhood objects in mind, using the scale and format of familiar items:  comic books and comic panels, trading cards, children’s books, toys.  The use of old magazine clippings and recycled vintage frames further support this feel and mystique, giving the pieces a “lived-in” quality, as if they were pulled from the recesses of closets of the bedrooms we grew up in.

Ryan Heshka was born in 1970 in Manitoba, Canda. He lives and works in Vancouver, British Columbia, Canada. He has a bachelor degree in interior design and worked in that field for many years, in addition to animation, before making art and illustration his career.  Influenced by a lifelong love of comic books (favorite artists include Jack Kirby, Bill Everett and Basil Wolverton), pulp magazine art (Frank R. Paul cover art), old monster and B-movies (Ray Harryhausen movies, “King Kong”, “Dracula”, etc.), children’s books (Dr. Seuss), and vintage advertising and graphics, these sources have made their way into his art.  Drawing from a very early age, Heshka also used model building (miniature cities built  from cardboard) and super-8 movie making to create his own worlds. Each painting is a part of this world of re-imagined visuals and re- created dreams. Heshka has appeared in all the major illustration annuals, including American Illustration, Society of Illustrators, Communication Arts, 3 x 3, and Applied Arts.  Clients include Vanity Fair, Wall Street Journal, The New York Times, Playboy, Esquire, Forbes, Topps, and DreamWorks SKG.  He has appeared in galleries across North America (including Roq La Rue, Seattle, WA; Richard Heller, LA; Copro Nason, LA; Orbit Gallery, New Jersey; Rotofugi, Chicago))and in Europe (Feinkunst Kruger, Germany; Antonio Colombo Arte Contemporanea, Italy), and has been published several times in BLAB! and books about the new underground art movement, including THE UPSET.  His second children’s book is set for release in Winter 2012, and his first book was optioned by DreamWorks SKG.  “Ours” at the Antonio Colombo Arte Contemporanea will be his first international solo show.