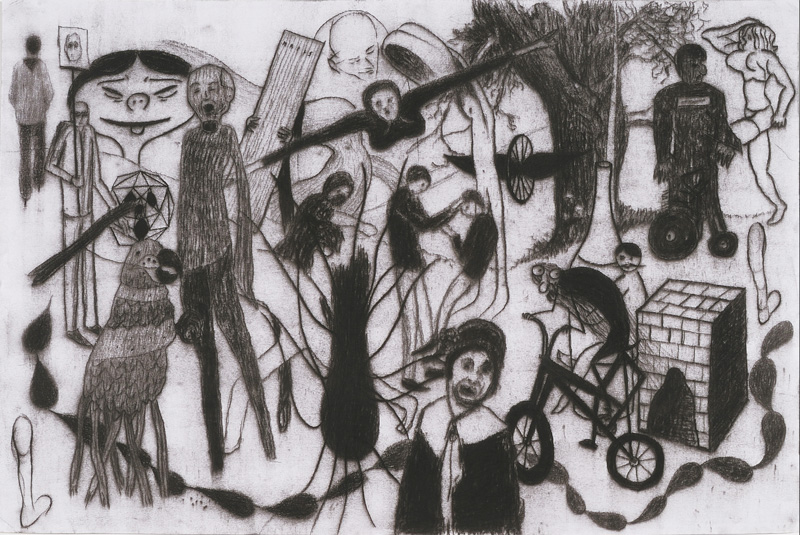 Antonio Colombo presents, on 8 June, the group drawing show Orde di segnatori. Giuliano Guatta, in the non-customary role of curator of the show, introduces the event with an essay written for the occasion.
“A vision takes form before my wayfarer’s eyes, searching the horizon from this highland: in the distance, I see drafting hordes advancing. As I wander in pursuit of the sign, I can glimpse them in the distance, approaching, in disorderly but surging ranks. Is it a mirage, or is it real?
Signers, de-signers, draftsmen, some marked, others not, as I hear, one of them shouts. Bodies that mark, narrate, trace borders, blaze paths in the dense underbrush.
Drawing is a form of resistance, of guerilla warfare, it is a trench. A dig. Excavation has to do with foundations, with the foundation, the beginning. Marks that move on this surface, figures in this becoming landscape that takes form from their passage. A ragged advance, deserters from more or less regular armies, motley renegades who now tread the same ground: some embrace, others argue, others still engage in fisticuffs. Certain loners want none of it, but history has placed them there.
I watch them inexorably advance, in this landscape, between these walls, for a few moments, a few days… it is a chance to make a group portrait, like it or not you’ll just have to accept it, so stand still and… but… wait a second… I am being overrun by this drafting horde… a warning to all those who remain still, sitting there, thinking… to all those who care nothing for signs… we are coming!!!”